My boyfriend bought a really nice plant for me from your store and apparently he mentioned that I have some succulent questions and someone there said I should just email you. So here goes! 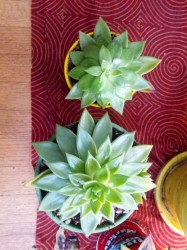 I bought these succulent clippings for a wedding in June. After the wedding I put them on a tray with paper towel underneath and just soaked the paper towel occasionally. They seemed to be doing fine but haven’t really grown any serious roots.

I tried to put them in dirt (as you can see) but the don’t seem to be doing as well now (maybe because the dirt absorbs the water before the succulent can get to it?). 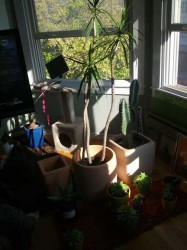 Anyway, can you advise me on how to turn a succulent clipping into a free-standing plant? Thank you!

It sounds like you are doing fine with them. It can take a few months, especially in winter, for those succulents to develop good roots. The plants should be fine in the meantime. Water every 2 weeks or less during the winter, more in the summer.

In general the best way to root cuttings is to let the cut end dry and heal over, then put them straight into dry cactus soil (we sell our own cutom blend). Don’t water for a week, and then start watering regularly same as if they had roots.

The plants do look like they might not be getting enough sun. I can’t tell if that was from before the cuttings were taken, or if it’s because they’re on the floor below where the sun gets to. But I would make sure they’re getting 3-4 hours of direct sun every day.