Hello,
We’re the women who were in on Sunday and were arranging, and finally purchasing the manzanitas, sage and the little euphorbia obessa. We could use your help.

While we were there we talked with Keith about what we think is a fungus that killed the tree that used to be in our front yard. The fungus appeared on the stump after we had the tree cut down (it was dead.) We’re concerned about planting the new trees close to this area, that they might also be attacked by this fungus.

Anyway, Keith said that we could send a photo of the fungus and he would try to identify it.

We’re going to have someone install these plants for us and would appreciate your quick reply. 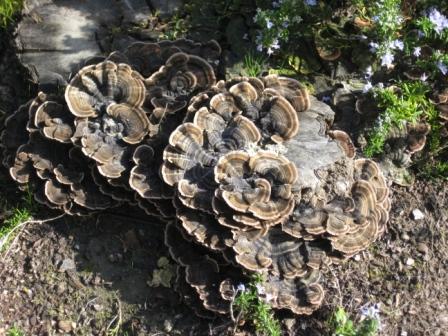 Thanks for your help.
Lynn & Joanne

It looks like your stump is being eaten by a bracket fungi called Trametes versicolor, or “Wild Turkey Tail”. The brackets are the fruiting bodies of the organism that is actually inside the stump eating the cellulose. This species only attacks dead or nearly dead hardwoods so it is unlikely to be what killed the tree, but took advantage of the food source after it was dead.

So we do not believe this fungus would cause any problem planting a new healthy manzanita.

But it is a amazing and beautiful artifact.
Peter