Agaves in Winter – The Questioning

We bought some black bamboo about a year ago from you guys. They are doing great and wow does it grow fast!

I had a question about an agave that we’ve had a little while longer. It has been sporting these little yellowish spots on it lately and they seem to be multiplying. We’ve been watering it about once a month over the winter. This one and another one we bought are the first we’ve owned so I’m not quite sure what its ailment might be. (the other one seems fine aside from re-potting shock it endured a little while back) 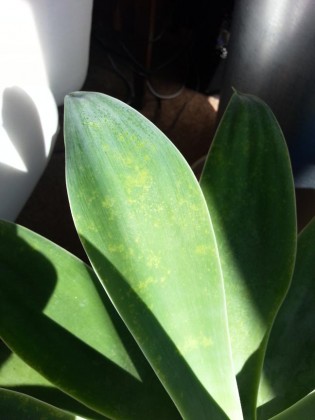 Is this indicative of something wrong? Pic is attached. Any suggestions would be greatly appreciated!

Jared,
It looks like your Agave attenuata has taken some winter damage from the freeze we had in January. Over time these damaged leaves will die off and be replaced by new leaves that will come out of the center of the plant. In the meantime there’s not a lot you need to or can do.
Peter